Traffic Safety Featured Project: Effect of Signing and Striping on the Safety of a Two-Lane Roundabout 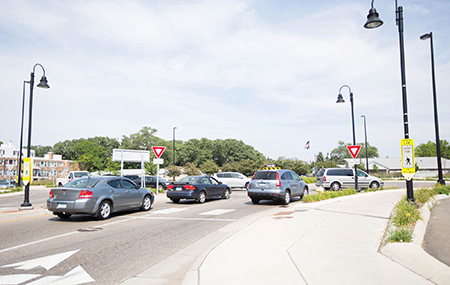 Since the introduction of the modern roundabout to North America nearly two decades ago, roundabout acceptance has continued to grow. This acceptance is attributed to the superior operational and safety performance of roundabouts relative to conventional signalized intersections in appropriate conditions. Although multi-lane roundabouts have been found to be safer than conventional alternatives, especially with respect to injury and fatal crashes, they are not without safety challenges. One of these challenges is getting motorists to select and stay in their proper lanes as they navigate the roundabout.

It has been observed that some motorists knowingly or unknowingly change lanes in a roundabout by entering in the right lane, crossing to the center lane midway through the circular roadway, and then crossing back into the right lane as they exit. This behavior creates a risk of sideswipe crashes. Another challenge for both safety and operational efficiency is that motorists sometimes have difficulty interpreting lane-control arrows in the roundabout context.

This research investigated the impact lane markings and signing have on driving behavior at a two-lane roundabout located in Richfield, Minnesota. After its completion in 2008, this roundabout sustained a suspiciously high number of crashes. In response, through this research, engineers experimented with changes in the roundabout's signs and lane markings, as roundabout design regulations are relatively non-specific in contrast to those for standard signalized intersections.

An observational study was conducted that reduced 216 hours of before-and-after video records of the roundabout into a database of all the violations committed by drivers. Along with the observational data, crash records were analyzed, demonstrating that improper turns and failing to properly yield account for the majority of collisions.

The changes implemented in the approaches to the roundabout—specifically the extension of the solid line—seems to have reinforced the message to drivers that they must select the correct lane before approaching the roundabout entrance. Although choosing the correct lane does not directly address yielding violations, it does reduce the occurrence of drivers conducting an improper turn and to some extent reduces the need for a driver to change lanes within the roundabout.

This research was funded by the Minnesota Local Road Research Board.