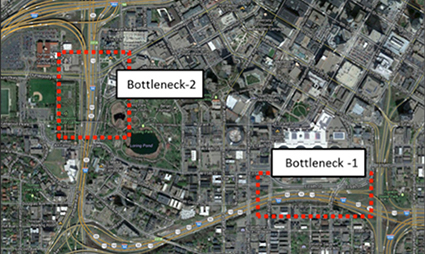 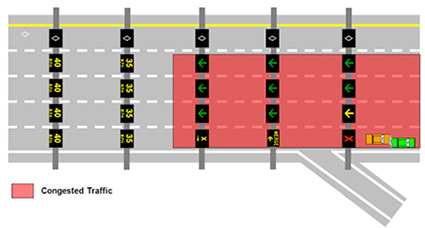 Figure 4. Display of Intelligent Lane Control Signals during an incident

Figure 5. Map of video and machine vision sensors along I-94 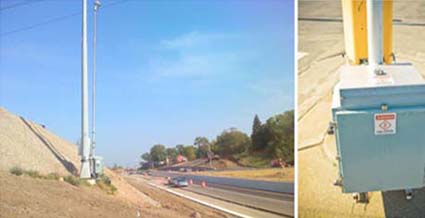 Improving the safety of transportation networks is a key area of research at the Minnesota Traffic Observatory. The MTO’s ability to gather fine-grained data on traffic dynamics has driven significant research into the causes of vehicle crashes and potential countermeasures. In addition to studying crashes and dangerous traffic conditions, the MTO provides support to researchers seeking to understand how the design and construction of road networks affects safety and mobility.

Interstate 94, in the vicinity of the Twin Cities of Minneapolis and St Paul in Minnesota, is a major freeway that connects the two CBDs and carries an average daily traffic of more than 80,000 vehicles in each direction. The corridor has an average of three general purpose lanes in each direction with auxiliary lanes at several locations for entering and exiting traffic. Figure 1 shows the portion of I-94 from Huron Avenue on the east to the I-394 interchange downstream of the Lowry Hill tunnel. There is a 1.7 mile portion of this corridor along westbound I-94 starting from 11th Avenue to the beginning of the Lowry Hill tunnel which is identified by MnDOT as the highest crash area in the state. The crash rate is 4.81 crashes/MVM (million vehicle miles) which is roughly equivalent to one crash every two days.

At this location, traffic congestion occurs for roughly five hours daily during the afternoon peak hours. There are two locations which act as bottlenecks (Figure 2). In most cases, breakdown occurs at bottleneck 1. This is the location where the ramp from I-35W northbound merges with I-94 westbound as shown in a magnified view in Figure 3.

To address the problems caused by these bottlenecks, as well as to improve traffic flow and safety in the entire corridor, MnDOT implemented an ATM infrastructure which includes an Advisory Variable Speed Limit system. The VSL system is operated through the Intelligent Lane Control Signs (ILCS) system. The ILCS is comprised of lane by lane variable message signs placed roughly every half mile on overhead gantries (Figure 4). The locations of each gantry within the High Crash Area are shown as vertical red bars in Figure 1. The VSL system uses speed measurements at the bottlenecks from radar sensors and translates them into advisory speeds displayed at various upstream VSL gantries. This provides warnings to upstream drivers to reduce their speeds gradually as they travel downstream, generating a forward moving shockwave intended to weaken or absorb backward moving congestion shockwaves.

Given the importance of this freeway location the Minnesota Traffic Observatory of the University of Minnesota in 2002 established a permanent laboratory for freeway operations and safety research. A variety of sensors and data collection devices are used throughout the study area to collect key traffic data and video observations (Hourdos et al. 2004). The I-94 Field Lab instrumentation is in addition to the increased infrastructure MnDOT has deployed in this area. MnDOT maintains additional surveillance cameras and radar sensors on each ATM gantry as well as additional support infrastructure for the deployment of new instrumentation.

In the figure 5, the coverage area for each camera is indicated by the boxed regions and the approximate locations of the machine vision detectors are indicated by bars across the roadway. As part of the Roadway Safety Institute (new region 5 UTC), the I-94 Field Lab will be expanded to include high resolution radar sensors capable of extracting individual vehicle trajectories. The new instrumentation is aimed towards Connected Vehicle safety and operational application development and evaluation.

The I-94 Field Lab of the Minnesota Traffic Observatory has been utilized in a number of project during the last decade.

One example is: Accident Prevention Based on Automatic Detection of Accident Prone Traffic Conditions Phase I and II. This project took a close look of the crashes happening in this freeway location. The hypothesis that there are certain traffic conditions that are favorable to crashes was supported and a real-time detection algorithm was developed to detect them (Hourdos et al. 2006). In a new project that is just now starting this algorithm will be integrated into a driver warning system utilizing the ILCS upstream of the high crash area. The produced, infrastructure based queue warning system will be evaluated in the field and if successful it will become permanent addition to MnDOT’s ATM in this and possibly other locations.

Recent projects utilizing TIMs in conjunction with traffic safety are outlined below.

Consistently ranked as one of the most bicycle friendly cities in the country, the City of Minneapolis has been experimenting with alternative bicycle infrastructure in an effort to attract more cyclists and improve cyclists’ safety and experience. The MTO collected video footage of campus cyclists on one of the most heavily used on-street bicycling facilities in the state using the TIM system. The lab also performed before-and-after studies to evaluate the effects of several new bicycle infrastructures, including the country’s first advisory bike lane, bicycle traffic signals, and colored green bicycle lanes, crosswalks, and conflict zones. 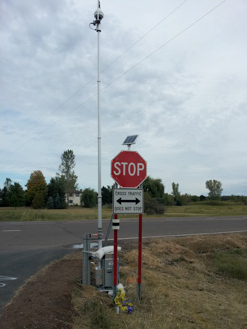 To test hypotheses concerning driver response at LED stop signs, TIM units were set up at a rural location before and after the installation of an LED stop sign. Driver trajectories were extracted from the video and used to compare stop positions, speeds, time and place of deceleration, and magnitude of deceleration for drivers approaching intersections with and without the altered traffic control device. In conjunction with a statistical model relating crash frequency to traffic volume, this study developed a base-case statistical model that estimates the crash reduction effects of LED stop signs.

To examine the gap-selection behavior of drivers at green-ball permitted left turns  against those with the flashing yellow arrow indicators, TIM units were deployed to two locations selected for their relatively high speed limits (40-45 mph). The higher speed limits coincide with more difficult driver judgment and increased risk. Trajectories of vehicles using the flashing yellow arrow treatments were extracted from the video and are being analyzed to assess the safety effects of this new traffic control device.

Trailers containing custom recording systems based on the same devices used within the other TIM observation stations have been deployed for several studies, notably two relevant to roundabouts. The most recent iteration of these recording systems utilizes a 360 degree high-resolution camera which captured the entire roundabout in one continuous image. 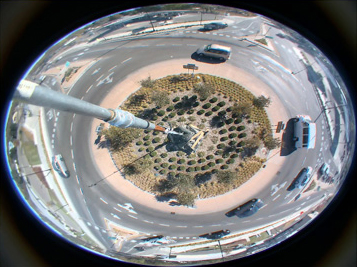 With benefits such as improved safety, minimized delays, and reduced vehicle emissions, roundabouts have become an increasingly popular design solution for intersections throughout the United States. Despite this increase, drivers throughout the country continue to misunderstand the rules of the roundabout, resulting in improper use and avoidable collisions. National design guidelines pertaining to roundabout signing and striping are in their infancy, but could be the key to improving driver understanding of proper roundabout use. To assess the effectiveness of two different designs, the MTO deployed  a custom recording system based on the same system used within other TIM stations prior to and following the implementation of changes to the signing and striping of a subject roundabout in Richfield, Minnesota. The associated before-and-after study utilized the collected video to extract and compare the frequency of instances of vehicular violations including improper turns, yielding failures, traffic impedances, as well as traffic volumes.

Addressing the lack of existing research pertaining to pedestrian safety at roundabouts, a study was developed to investigate pedestrian and bicyclist accessibility using two subject urban roundabouts located in Minneapolis. Using the video collected from the MTO’s custom recording system, thousands of pedestrian and cyclist crossings were extracted and cross-referenced with the conditions experienced by drivers within the roundabout. A regression analysis was performed for both sites, producing resulting regarding driver yielding rates and pedestrian and cyclist delay and safety.