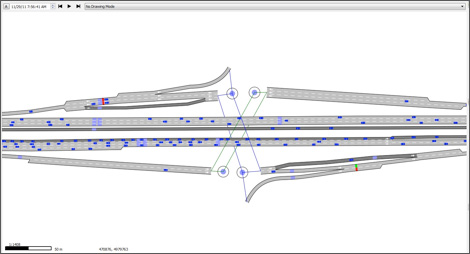 A complete simulation and modeling center, equipped for any project from a single intersection to a metropolitan area.

The Minnesota Traffic Observatory has developed several generations of data acquisition systems to meet the needs of researchers working on freeway traffic flow issues. Primary among these is the Beholder system, a fully independent net­work of video detectors providing space- and time-continuous coverage of the I-35W/I-94 Commons freeway area in Minneapolis—the freeway section with the highest crash frequency in the state.

Beholder expands on the pioneering Autoscope™ system, originally developed at the University of Minnesota and now in commercial use. Beholder’s portable monitoring stations are currently deployed on the roofs of several high-rise buildings overlooking the freeway, and transmit data back to the lab via a high-speed wire­less network. Available data include individual vehicle measurements and trajectories of vehicles involved in crashes and near-crashes.

The Regional Transportation Management Center (RTMC), part of the Minnesota Department of Transportation (MnDOT), supplies 16 switchable video feeds to the lab, which give researchers the ability to monitor any of the approximately 300 MnDOT cameras throughout the metropolitan freeway network. The MTO is also hosting an archive of MnDOT's freeway traffic data, which contains volume and density data from over 7000 imbedded pavement detectors throughout the Twin Cities.

The MTO’s data capabilities are also being used to support research into traffic management on arterial streets. The SMART-SIGNAL system, developed in the MTO, integrates vehicle detection and signal phase tracking and breaks new ground in the scale and resolution of data on arterial intersections.

Advisory speed limit signs were installed and activated along I-35W in 2010 and I-94 in 2012.  The MTO conducted a study of the impacts of the VSL system on driver behavior and congestion using detector data and variable message activations along the I-35W corridor.  A before-after methodology was used to look for changes in overall congestion patterns and localized driver behavior.  Further investigations are planned using the I-94 corridor.

Beginning this year, the MTO will begin a study examining the impact of MnDOT’s Incident Lane Closure System (ILCS).  The system uses the same variable message signs as the VSL system but instead displays lane closure advisories.  MnDOT operators deploy messages to divert traffic away from incidents to improve safety and throughput until crashes and stalled vehicles can be cleared from the freeway.  The MTO will analyze the effectiveness of these warnings in moving traffic away from closed lanes, whether the signs create a safety issue while redirecting drivers into more congested lanes, and other changes in driver behavior caused by the use of the ILCS.

Beginning in 2005 MnDOT has been adding high-occupancy toll (HOT) lanes to Interstate 35W (I-35W) and Interstate 394 (I-394), respectively south and west of downtown Minneapolis.  The interstates exhibit differences pertaining to the length of open access areas in their HOT lane designs.  Using the lab’s RTMC feeds, video was collected from the I-35W and I-394 corridors of interest. This study analyzed the two designs by comparing recorded shockwave lengths, frequency of dangerous lane changes, and the rate of vehicles in the HOT lane that experience shockwaves. 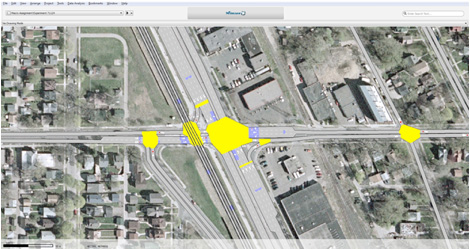 The MTO is in the process of using the transport modeling software Aimsun to improve upon the regional planning model, a tool used and maintained by the Metropolitan Council for long-range planning. This involves updating the existing infrastructure and implementing high-resolution, microscopic modeling to large portions of the Twin Cities metropolitan area. By incorporating the light rail and other transit systems, vehicle interactions, accurate and detailed traffic control devices, and real data calibration, the effects of new or changing infrastructure can be more accurately seen. The more detailed the model becomes, the more accurate and beneficial it is to the transportation industry.

To assess and potentially improve upon the existing MnPASS pricing algorithm parameters, the MTO is developing a high-resolution microscopic network of I-394 and its high-occupancy toll lanes using Aimsun. Using real data from MnDOT detectors the model is calibrated to demonstrate realistic traffic conditions along the I-394 corridor.

IRIS is the control system for all the ramp meters, cameras, and detectors in the Twin Cities metropolitan area.  By integrating the control mechanism into Aimsun, the MTO is able to model new ramp metering strategies without full field implementation. This grants us improved flexibility for modeling traffic flows and queuing behaviors throughout the network in a simulation environment.